Human (According to the Japanese manual)

Wizeman (ワイズマン Waizuman), also known as Wizeman the Wicked, is the main antagonist of the NiGHTS series. He is the God and creator of Nightmare and all of its inhabitants.

Wizeman is a God who desires to rule the world of dreams and open a portal to invade and rule the waking world as well. To do that, he created the Nightmarens with the purpose to destroy the world of dreams, Nightopia, and to steal ideya (dream energy) from humans during their sleep. Once Wizeman collects enough ideya, he will be able to open a portal to the waking world and to invade it.

Out of the five ideyas, the Red Ideya of Courage is the strongest. Due to its power, none of Wizeman's creations could steal it. Because of that, Wizeman created NiGHTS and Reala to be his strongest creations and to steal it. But to his surprise, NiGHTS decided to rebel against him. Since then, Wizeman never managed to succeed achieving his plans as NiGHTS with the help of visitors always stop him.

Very little about Wizeman's past is known. According to the NiGHTS into Dreams japanese manual, Wizeman is said to be a Visitor deprived of any Ideya.[1] In other words, he is an actual human (or at least was once a human). Since his plan includes opening a portal to invade the waking world, Wizeman is somehow trapped in the Night Dimension and doesn't have access to the waking world anymore. According to the same manual, Wizeman was the first intelligent life in the Night Dimension.

How Wizeman got powers, became the God of the Nightmare, got trapped in the Night Dimension, why he became evil and why he has no Ideyas are unanswered mysteries of the series. As Wizeman is thought to be an actual human, he is the only Night Dimension resident who is not genderless.

Wizeman's true form is a strange, caped humanoid creature with a spiked metallic crown covering most of his head. He has six metallic floating hands, each one with an eye.

In NiGHTS into Dreams, he has three jewels on his chest, in NiGHTS: Journey of Dreams, they are replaced with what appears to be an amulet with two small green jewels and a big blue one.

Wizeman is a very cruel and cold dictator who has no sympathy nor compassion for anybody, not even for his own creations. If they displease him, he won't think twice about destroying them, which is shown in NiGHTS: Journey of Dreams, where he crushes Donbalon and sends Bomamba to fall down into the bottom of the deepest of Nightmare. In the NiGHTS Archie Comics, he orders all of his nightmarens to stop NiGHTS, otherwise he will destroy all of them.

Not even Reala is spared of Wizeman's wrath. Reala is very loyal and hardworking. He does everything to please Wizeman, including even taking control of the Cerberus, a nightmaren he deeply fears. Despite that, Wizeman has never shown any gratitude for his loyalty and hard work although it’s unlikely Wizeman would actually destroy Reala due to him being his only loyal First Level Nightmaren and being one of his strongest creations.

Wizeman has an "abusive parent"-like behavior towards NiGHTS, telling NiGHTS to "hold his tongue" when NiGHTS speaks back to him and calling NiGHTS' uprising "infantile disobidience". Wizeman refuses to accept NiGHTS' free will, yet curiously, he never tries to destroy NiGHTS. Instead, he insists on making NiGHTS his minion again. The reason for that is most likely because NiGHTS is one of Wizeman's strongest creations being the only Level 1 Nightmaren other than Reala and because of the possibility that Level 1 Nightmarens are difficult for him to create.

In contrast to his behavior towards his minions, none of the nightmarens but Reala appears to like Wizeman neither. That is shown in the fifth NiGHTS Archie Comic issue, where after Wizeman getting destroyed, none of the second level nightmarens (Jackle, Puffy, Gillwing and Clawz) showed remorse over their creator's demise.

According to the NiGHTS into Dreams manual, Wizeman is responsible for sending Elliot and Claris through dreamworlds which were created by the depths of their minds to confuse them. Wizeman is the boss of both Elliot's and Claris' versions of Twin Seeds and final boss of the game overall. His boss battle theme is called "D' Force Master".

Wizeman will always attack keeping long distance from NiGHTS, Elliot and Claris, to defeat him, the player must avoid his attacks and reach him, once they do that, Wizeman will try to protect himself with a force shield, which can be broken if both NiGHTS hold it together, once they hurt Wizeman, he will teleport far away from NiGHTS and the sequence will repeat, to defeat him, the player must attacks Wizeman four times.

In NiGHTS: Journey of Dreams, Wizeman orders Reala to stop NiGHTS and bring them back to Nightmare. As Reala and the second level nightmarens fail in their missions, Wizeman's anger rises. It's then that after NiGHTS recovers both William and Helen's green ideya that Wizeman runs out of patience and decides to attack the Dream Gate.

Wizeman is the boss of both Will and Helen's versions of Bellbridge and the game's final boss overall.

In the normal ending, Wizeman captures both NiGHTS and Helen and drags them into the dark ocean. In Helen's story, Wizeman reveals he pretends to "reset" NiGHTS, replacing NiGHTS' mind with a new and more obedient one, but before that, he leaves NiGHTS chained at Bellbridge clock tower for unknown reasons. Helen somehow escapes from Wizeman and joins forces with Will. The visitors save NiGHTS before he gets resetted. It's then that Wizeman reappears and fights NiGHTS, Will and Helen. After getting defeated, Will and Helen recover the Yellow Ideya and Wizeman turns into a purple orb that is slowly disappearing. Before fading away entirely, Wizeman reveals that he will always exists as long as evil still lurks within the hearts of humans.

In the secret ending, Wizeman captures NiGHTS but not Helen. Instead, he gets both Will and Helen's yellow ideya. Just like in the normal ending, he promises to reset NiGHTS, but once again he just leaves NiGHTS chained at the Bellbridge clock tower and the two visitors save NiGHTS before Wizeman resets them.

In this ending however, when Wizeman appears to fight NiGHTS, Will and Helen, he reveals that if NiGHTS destroys him, all of his creations will be destroyed as well, including NiGHTS itself. NiGHTS acknowledge that, and fights and defeats Wizeman anyways to save Nightopia. After getting defeated this time, Wizeman isn't seen again, however as he warned, all of his creations are destroyed as NiGHTS slowly starts to disappear in front of Will and Helen.

Wizeman's battle is the same in both the normal and the secret ending, Wizeman will always attack keeping a long distance from NiGHTS, Will and Helen, to defeat him, the player must avoid his attacks and reaches him, once they do that, Wizeman will try to protect himself with a force shield, to break it, both NiGHTS must hold the shield, once they do that they will hurt Wizeman, who'll teleport to far away from NiGHTS and the sequence repeats, to defeat Wizeman, the player must attacks him three times.

In this game, NiGHTS must use a specific Persona Mask to reach Wizeman, Wizeman's attacks are:

Wizeman makes a small appearance in the Japan exclusive storybook, NiGHTS: Flying Through the Sky Without Wings.

After Reala failed, Wizeman decides to punish NiGHTS himself. He swallows all of the light from Nightopia and wraps both NiGHTS and Elliot into deep darkness. However to his surprise, NiGHTS and Elliot didn't fear the darkness and trusted each other; their courage made a tiny light appear which they dived into. When they came closer to it, the light absorbed all of the darkness and Wizeman fled, but promised to return as soon as weakness is born again in either NiGHTS or Elliot's hearts.

Wizeman starred in the NiGHTS Archie Comics series, as the main antagonist of the first three Issues.

In the first Issue, Wizeman makes a smith see a tower in his dream, which would inspire him to create an identical one in real life (that would be the Twin Seeds tower). These two towers would create a portal between the waking world and the Night Dimension, which would open only once per century. The portal however, would still have a barrier which could only be broken using a red ideya from one of the two perfect dreamers of the century. Everything was going according to Wizeman's plan, as NiGHTS and Reala had captured the two perfect dreamers. When one of the dreamers convinces NiGHTS to rebel against Wizeman, NiGHTS escapes with the red ideyas and throws them into the portal to the waking world. Wizeman would now have to wait 100 years to capture the red ideyas from the next two perfect dreamers. Those dreamers are Elliot and Claris.

During the time gap, Wizeman locks both NiGHTS and Reala inside an ideya palace; NiGHTS for the uprising and Reala for not stopping NiGHTS from discarding the red ideyas into the portal. Elliot meets up with NiGHTS, and Wizeman, who can see everything through his All Seeing Palms, sends Gillwing to attack them. At the end of the story issue, Wizeman sends Elliot's basketball rival, Roger Wilkeah, to Nightmare and makes him dualize with Reala.

In the second Issue, Wizeman convinces Claris to give him her red ideya, in exchange for all of her dreams coming true. The comic ends with Wizeman laughing as his plan is succeeding.

In the third Issue, Wizeman is about to open the portal to the waking world, when Napp takes Claris' red ideya and brings it back to her. Elliot and Claris rescue NiGHTS and together, they defeat Wizeman. From Issue 4 foward, Reala self-proclaims itself the new ruler of Nightmare and Wizeman doesn't make another appearance. However, his All Seeing Palms are still used by Reala.

Wizeman makes a small appearance in Worlds Unite, where he orders Reala to join forces with NiGHTS and the rest of the heroes to stop Sigma from conquesting the Multiverse. This is because he doesn't want competition with anyone ruling the waking world.

Being the lord and creator of the Nightmarens, Wizeman is in control of all of the Nightmare world. He is capable of many things including levitation, teleportation, creation of Nightmaren at any level, Wizeman has six floating hands with eyes that can fire very powerful lasers and rays of dark energy, he can also cast various magical spells. 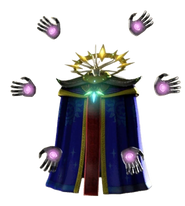 Wizeman cameo at the beginning of the Nightmare Zone DLC from Sonic Lost World.

One of Wizeman's hands as it appears in the Nightmare Zone DLC in Sonic Lost World. 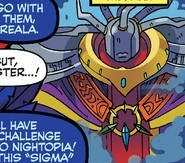 Wizeman in Worlds Unite.
Add a photo to this gallery

Wizeman: "Heed my words, as long as darkness exists in the hearts of the humans, then I... and the nightmares... shall never be destroyed..."
Zeromus: "I will not die. So long as there is evil and hatred in the hearts of man, I shall live on."
Nyarlathotep:  "I am the shadow of all humans. As long as humans have dark hearts, I will live."

Retrieved from "https://nid.fandom.com/wiki/Wizeman_the_Wicked?oldid=12406"
Community content is available under CC-BY-SA unless otherwise noted.