Visitor (or dreamer) is a term used by the inhabitants of the Night Dimension to describe the humans that "visit" the dimension in their dreams, when they fall asleep, the nightmarens try to steal their ideyas, colorful orbs that represent dream energy, once the nightmarens steal enough ideyas, they will be able to invade the real world. Elliot Edwards, Claris Sinclair, Helen Cartwright and William Taylor are important visitors that have saved the Night Dimension along with NiGHTS, when the Nightmarens imprision NiGHTS, the visitors can go inside the cage and fuse with NiGHTS (the fusion's name is called dualize), when they do that, they are capable of realising NiGHTS from the cage for some time, allowing NiGHTS to save Nightopia's locations, NiGHTS uses their strongest ideya, the red ideya of courage to become more powerful.

Elliot is one of the two Visitors from NiGHTS into Dreams, he a young teenager with blue spike hair, blue uniform and shoes and green pants, Elliot loves to play basketball with his friends, but one day, three older boys defeated him at his favorite hobby and start to bully Elliot by laughing and mocking him in front of his best friends, making him feel very embarrassed, one night, Elliot is dreaming about the moment when he got mocked by the older boys, when suddently, the three boys turn into monsters, he runs from them through a corridor when he sees a light which transports him to the Night Dimension, where he meets NiGHTS and his adventure begins.

Claris is one of the two Visitors from NiGHTS into Dreams, she is a young teenager with pink hair, orange clothes and shoes and red pants, Claris comes from a family of artists and she wants to prove them she inherited their talents, she auditioned for the headlining musical for the Twin Seeds centennial commemoration celebrations and while she passed in the primary examination, she felt very insecure in the second one and she heard a voice inside saying everybody is gonna laugh at her, one night, Claris is dreaming that she is in the audition, when the judges start to laugh and turn into monsters, she runs from them through a corridor when she sees a light which transports her to the Night Dimension, where she meets NiGHTS and her adventure begins.

William (addressed in the game by his nickname, "Will") is one of the two Visitors from NiGHTS: Journey of Dreams, he is a 12 year old boy who's blond and wears a red soccer shirt, a long-sleeved beige undershirt, a yellow and blue vest, gray soccer shorts, blue and yellow soccer shoes, and red socks, William loves soccer, he's also very close to his father and doesn't have many friends, one day, his father had to leave him due his work and now he is feeling very loleny, one night, William is dreaming about what happened, when suddently, his team members appear in his dream laughing at him and then, they turn into monsters, William runs from them through an endless dark place when he sees a light which transports him to the Night Dimension, where he meets NiGHTS and his adventure begins.

Helen is one of the two Visitors from NiGHTS: Journey of Dreams, she is a 12 years old girl with dishwater blonde hair tied in a ponytail with a pink hair-tie, and she wears a white long sleeved ruffled shirt with a big collar, a pink long-sleeved coat opened with curving collars, a blue slightly pleated skirt with a thin white laced hem, black knee-down pants with white cuffs, red shoes with yellow details and brown straps and soles, and white socks, Helen loves to play violins, she used to play violion with her mother everyday and both are going to play in a big concert, however, Helen started to become more interested in spending time with her friends and she is feeling very guilt about it, one night, Helen is dreaming about what is happening and her behavior, when suddently, her friends and a projection of her mother turn into monsters, she runs from them through an endless dark place when she sees a light which transports her to the Night Dimension, where she meets NiGHTS and her adventure begins.

Roger is the leader of the trio of older boys who bullied Elliot in NiGHTS into Dreams and he is Elliot's main rival, he is a tall blonde boy with spike hair who wears dark red uniform and shoes and orange pants, in NiGHTS into dreams, Roger is just a minor character who appears in Elliot's intro and ending cutscenes, but in 1998, Archie Comics released a comic book series based on the game and Roger is a major character there along with NiGHTS, Reala, Wizeman, Elliot and Claris, he reprises his role from the game, but this time he also goes to the Night Dimension (specifically to Nightmare) and he works with Wizeman, Reala and the other nightmarens, Roger dualizes with Reala and help him fight NiGHTS, making him the first and so far, only visitor to dualize with Reala, however, from the fifth issue foward, he starts to change sides and by the end of issue 6, he betrays the nightmarens and indirectly help NiGHTS defeating Reala by not allowing Reala to use his dream energy anymore, making Reala very weak to fight NiGHTS.

Wizeman is the God of all Nightmare and the series main antagonist, he is the creator of all the nightmarens including NiGHTS and Reala and his goal is to destroy Nightopia and steal human's ideya so he can come to the waking world and rule it all, though NiGHTS disagreed with his goal and started an uprising all by himself, now NiGHTS is constantly trying to stop Wizeman from accomplishing his goals.

Not counting Wizeman, Visitors are ordinary human begins and lack any type of magical power until the games climax, where all of them receive the ability of fly and drill dash by themselves, the visitors are also very talented at doing what they like, basketball for Elliot, singing for Claris, soccer for William and violins for Helen, additionally, In NiGHTS into dreams, both Elliot and Claris are capable of jumping really high and they can protect themselves from the Alarm Egg by jumping over it, in NiGHTS: Journey of dreams, William and Helen can shoot blue chips at third level nightmarens to protect themselves.

Their ideyas also cause huge impact in the Night Dimension and it's residents, they are what give NiGHTS enough power to fight the Wizeman and his nightmarens, in the Archie Comics, Reala used Roger's dream energy and became very powerful, but once Roger betrayed him and stopped giving it to him, Reala got extremely weak and his energy slowly started to get drained, meaning the Visitors dream energy causes huge impacts on the nightmarens, even the most powerful ones like Reala, the Visitors ideyas are also what build Nightopia's locations based on something about the Visitors, for example, Lost Park in NiGHTS: Journey of dreams was created by the Blue Ideya based on the fact William is feeling very loleny.

In the NiGHTS Storybook, Elliot's red ideya got so strong that he was capable of defeating Reala by himself, meaning the visitor's red ideyas can reach such level of power, that not even the strongest nightmaren from Wizeman army is capable of handling it, it all depends on how brave the visitor is, in Elliot's case, it was because he was brave enough to jump into deep darkness to save NiGHTS.

Wizeman has no ideya/dream energy, instead, he somehow got God powers and is different from the rest of the visitors, Wizeman has many powers, with the two main ones being power of creation and reality manipulation, unlike the others visitors, who have no control over how their ideyas shape their dream worlds, Wizeman can shape reality the way he wants to, however, just like the nightmarens, Wizeman biggest weakness is the red ideya, which is the others visitors main weapons. 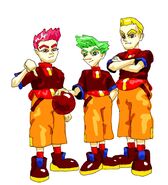 Roger and his friends artwork from 1996.

JOD Wizeman artwork from 2007.
Add a photo to this gallery

Retrieved from "https://nid.fandom.com/wiki/Visitor?oldid=11118"
Community content is available under CC-BY-SA unless otherwise noted.