Twin Seeds, called The Growth in the beginning of the stage, is the last dream in NiGHTS into Dreams, it is shared by Elliot Edwards and Claris Sinclair. It is the city that they live in, in the waking world. The musical theme is Growing Wings. 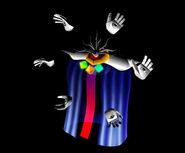 Boss: Wizeman the Wicked
Add a photo to this gallery

Retrieved from "https://nid.fandom.com/wiki/Twin_Seeds?oldid=10329"
Community content is available under CC-BY-SA unless otherwise noted.