Shleep are Nightmarens who have the heads of sheep or rams and yellow cottonlike wool. They don't do much besides float around and inflate to get in NiGHTS' way, although they can't hurt NiGHTS directly. They appear in both NiGHTS into Dreams and NiGHTS: Journey of Dreams.

Outside of NiGHTS, Shleeps made a cameo appearance in Sonic Pinball Party and Sonic & All-Stars Racing Transformed.

In NiGHTS into dreams, they can only inflate themselfs and act as obstacles to NiGHTS, however NiGHTS still can easily defeat them by using his drill dash.

In NiGHTS journey of dreams, they will surround themselves with their wool and if NiGHTS comes in contact, their wool will slow him down, but it won't cause damage.

In the NiGHTS Archie Comics a Shleep was able to make Claris fall asleep by spraying a yellow dust in her face.

Shleeps as they appear in the credits. 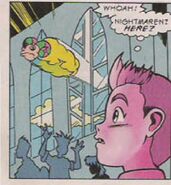 Shleep in the Archie Comics. 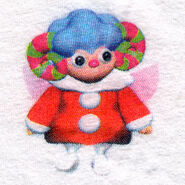 Mepian with a Shleep head.
Add a photo to this gallery

Retrieved from "https://nid.fandom.com/wiki/Shleep?oldid=10315"
Community content is available under CC-BY-SA unless otherwise noted.