Game Gag 1P Comic Sega-hen
Puffy is a second level nightmaren and boss in NiGHTS into Dreams. She is a humanoid opera singer rabbit.

"A rubber ball-like Second-Level, her body is pliable and flexible. Because of this, NiGHTS’s attacks don’t seem to work on her. Maybe somewhere around that mansion she created there’s a clue to defeating her."

- Puffy, according to a translated japanese bio.

In NiGHTS into Dreams, Puffy is Splash Garden's boss and an Elliot nightmaren, who'll attack after all ideyas are collected in the level. Her boss battle theme is called "She had long ears".

Due to her flexible body, Puffy does not take damage from any of NiGHTS attacks, so to defeat her the player must grab and throw Puffy through her mansion until they reach the end of it, where there will be a shelf, by throwing Puffy under it, the support will break, causing her to get smashed between the wall and the tumbling shelf.

Upon flying up to her, NiGHTS will automatically grab and start spinning her. The player shall aim and shoot her onward, sometimes it'll be necessary to break obstacles to proceed.

Puffy has ball physics, so everytime the player throws her, she will bounce around, when she is doing that, she may hit and damage NiGHTS.

Puffy's battle takes place at her mansion which consists of three rooms, each room with a hallway between them. Starting at the bedroom, then dining room and lastly bathroom. Stairs can also be seen on the back wall in the dining room. Along the walls of Puffy's level are many paintings of Nightmaren minions and one of herself. The portrait of Puffy is actually an original concept drawing.[1] After the bathroom, there is one last hallway where the shelf used to defeat Puffy is located.

A Puffy render appears in the concept arts.

In this mini game the player controls Sonic the Hedgehog who must collect all four ideyas in the Christmas NiGHTS version of Spring Valley on foot, after accomplishing that, Dr. "Eggman" Robotnik will appear as a boss parodying Puffy, [2] the boss theme will be a remix of the final boss battle theme from the Japanese and European version of Sonic CD with some bits of Puffy's theme in it called "Rolling Eggman".

A Puffy's portrait appears in the level at the dinning room.

In the Archie Comics series, Puffy is a Claris' nightmaren, contradicting with the game, where she is an Elliot nightmaren. Puffy is the representation of Madame Puffila, Claris' rude tutor who's training her for the audition who's responsable for Claris' anxiety and stage fright.

In the first issue of the series, Claris was having nightmares about her training with Puffila, when suddently Puffila turns into Puffy, who starts to mentally abuse Claris, claiming that her dream will never come true as she has no talent for singing. Claris screams for help and NiGHTS, who is dualized with Elliot and fighting Gillwing, hears her scream, NiGHTS unfuses with Elliot and leaves him fighting Gillwing by himself, NiGHTS dualizes with Claris and together, they take down Puffy.

Puffy later makes one last appearance in the fifth issue, where she tries to fight Reala along with Gillwing, Jackle and Clawz after Reala proclaiming himself the new ruler of nightmaren, before Puffy or any of the nightmarens have a chance to fight Reala, the later attacks and makes them fall into an abyss. 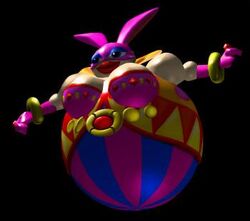 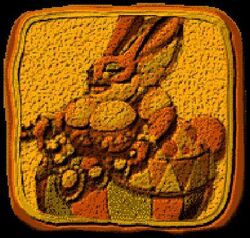 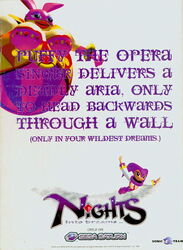 Puffy and NiGHTS featured in a magazine ad for NiGHTS into Dreams.

Puffy as she appeared in the Nightmare Zone DLC in Sonic Lost World.
Add a photo to this gallery

Retrieved from "https://nid.fandom.com/wiki/Puffy?oldid=10722"
Community content is available under CC-BY-SA unless otherwise noted.