Game Gag 1P Comic Sega-hen
Nightopians are residents of the Night Dimension and minor characters in the NiGHTS series. They are fairly like creatures who inhabit the visitor's dreams. The Nightopians are considered to be the series mascots.

The Nightopians are fairy like creatures who are minor characters in the NiGHTS series, they don't have any goal other than having fun nor significance to the game's story, their Artificial Life is a gameplay feature. The Nightopians were Sega's first attempt at creating Artifical Life and would later be the main inspiration for the Chaos and the Chao Garden in the Sonic series.

During gameplay, the Nightopians are spreaded through the levels where they just find ways of having fun and reproduce by dropping eggs around. If a Nightopian comes close to a Nightmaren, the Nightmaren will try to eat it.

Opening eggs in front of Nightopians or saving them from Nightmarens will make the Nightopians happy, when replaying the levels, they'll see NiGHTS as a friend and wave at him.

In every game, the Nightopians start disappearing after a while, starting from the oldest ones.

NiGHTS- Journey of Dreams - My Dream
My Dream gameplay.
Add a photo to this gallery

There are many types of Mepians for a single Nightmaren, they can be born with the Nightmaren's head, body, hands/claus and more. Hitting a Mepian with a different Nighmaren will make another Mepian that will have parts of both the hitten Mepian and the Nightmaren.

A Nightopian with the head of a Balooga and the body of a Murtle.
Add a photo to this gallery

To acquire one, it's necessary to make two Mepians created out of two different Nightmarens breed. However, the Mepians can't have the same nightmaren body parts (example: if one Mepian has a nightmaren head, the other can't).

Original information that was provided from the English NiGHTS into Dreams web site, no longer available.

Nightopian's page in the NiGHTS Journey of dreams site.

2 Nightopians and Helen from Journey of Dreams 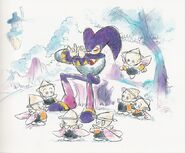 Nightopians in NiGHTS: Flying Through the Sky Without Wings 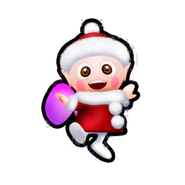 Christmas Nightopian in Sonic Runners.
Add a photo to this gallery

The Super Pian
More information about the Nightopians.

Retrieved from "https://nid.fandom.com/wiki/Nightopians?oldid=12250"
Community content is available under CC-BY-SA unless otherwise noted.