Start a Wiki
Kircles are crab-like Nightmarens that appeared in NiGHTS into Dreams. They will grab NiGHTS' feet and drag him to the ground, if they succeed, they will blow up and hurt NiGHTS. These, along with Shleep, are the only two level three giant Nightmarens to appear in Sonic and All Stars Racing Transformed.

Kircles resembles crabs, specifically hermit crabs, their shells, which bizarrely are also their faces, have red and white stripes and four yellow spikes and their big claws have red, yellow and orange stripes.

Kircle in the game's credits.

Kircle in the Archie Comics. 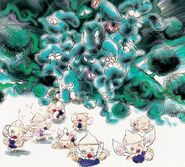 Kircle in NiGHTS: Flying Through the Sky Without Wings
Add a photo to this gallery

Retrieved from "https://nid.fandom.com/wiki/Kircles?oldid=9998"
Community content is available under CC-BY-SA unless otherwise noted.