Girania resembles a large piranha with a gladiator's helmet, short catfish whiskers, curved front fins, and spines along his back and tail.

In the first fight, he comes out of a double door into his arena-like room and swims around in the cobblestone floor. In the center of his room there are four pillars that break and disappear if he crashes into them. In the cinema before his second fight he comes out of the ground and swallows NiGHTS (and initially Helen, as they were dualized). The tactic for the fight is to wait for him to come out of the ground and drilldash his face (without getting to close to his mouth as he will swallow NiGHTS and go underground for a few seconds before resurfacing to spit the player out) once an attack connects he will turn into a large group of multicolored spheres, the player must then paraloop as many as possible before he turns back into a fish. When he has gotten small enough, NiGHTS can simply ram right into him and defeat him.

Girania's arena looks primarily like an underwater Colosseum. It has stair-like seats for spectators to sit in, and pillars line up around the top. Giant candles lie around on the floor, and in the center is a giant pit full of collapsed rubble. Girania can burrow into the floor and resurface. 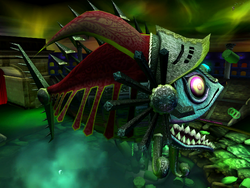 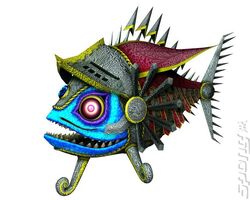 Girania's Artwork
Add a photo to this gallery

Retrieved from "https://nid.fandom.com/wiki/Girania?oldid=10334"
Community content is available under CC-BY-SA unless otherwise noted.