"By Second Level standards, he’s got a huge, enormous body but he’s really just a big air-head. The moment he considers you an enemy, he’ll stop at nothing to chase you down. He possesses the ability to re-grow his head from his long tail."

- Gillwing, according to a translated Japanese bio.

In NiGHTS into Dreams, Gillwing is Spring Valley's boss and a Claris nightmaren, who'll attack after all ideyas are collected in the level. His boss battle theme is called "The dragon gave a loud scream".

Gillwing's battle is known for being the fastest in the NiGHTS series, all he does is constantly fly in circles and if NiGHTS run into his mouth or tail, he will get damaged. To defeat him, it's necessary to destroy his whole tail and the player can do that in a fraction of seconds by going behind him and paralooping the end of his tail tail, the player must be careful because they may touch his tail when trying to do that, which will damage NiGHTS. [1]

A slower, but safer way to defeat Gillwing is by simply grabbing and tearing off his head, which will regenerate and replace a part of his tail, Gillwing will start shrinking and once there's no more tail, he will not be able to regenerate and will be defeated, however, the player should not fly into his mouth, otherwise, it will damage NiGHTS. [2]

It should be noted that the tail's hitbox size has changed in each version of the game, in the Sega Saturn version, it's much smaller, but in the Ps2, Ps3, Xbox 360 and PC versions, it became much bigger, meaning paralooping Gillwing's tail is much harder and risky in these versions.

Gillwing's battle happens in a weird garden like environment with giant flowers which are constantly opening and closing, mushrooms which keep growing and shrinking, rocks floating around and two red suns, in the center of the area, there's a weird tree with a blue star spinning above it, it's possible that the garden is located in space or perhaps in another planet, due the dark sky, floating rocks and the two red suns.

Gillwing returns to the promotional sampler disc of NiGHTS into Dreams, Christmas NiGHTS into Dreams, where he is once again the boss of Spring Valley (both Claris' and Elliot's versions of the level). In this game, Gillwing is keeping the Twin Seeds christmas tree star on his tail.

The battle is identical to his NiGHTS into Dreams version, where he will just fly in circles and the player can defeat him by paralooping the end of his tail or by grabbing and tearing off his head until he run out of tail. In Claris version of Spring Valley, Gillwing will start attacking from the left while in Elliot's version, he will start attacking from the right.

After defeating him, the star on his tail is brough back to the christmas tree.

The environment where the battle takes place is similar to the one from NiGHTS into Dreams. Some flowers are replaced by Christmas decorations and presents, the red suns are replaced by purple nebulas, there are gems spinning around the tree in the center of the stage and after the fight, a giant christmas tree appears in the center.

The star at the top of the Nightmaren tree-like formation in Gillwing's realm in NiGHTS into Dreams has use in Christmas NiGHTS into Dreams as after defeating Christmas Gillwing the player is awarded with the star that will eventually sit atop a very tree-trimmed Twin Seeds tower. This will make the player win the game in Christmas NiGHTS, but they do not recieve the star at the end of the battle in the original game.

In the Archie Comics series, it's Elliot who fights Gillwing, contradicting with the game, where he is a Claris nightmaren. In the first issue of the series, Wizeman releases Gillwing after seeing Elliot dualizing and releasing NiGHTS from the Ideya Palace. NiGHTS and Elliot were about to fight him when Claris, who was being attacked by Puffy screamed for help, NIGHTS unfused with Elliot to assist Claris, leaving him alone with Gillwing, as Elliot couldn't defeat him by himself, he ran into an Alarm Egg to wake up.

Elliot comes back to fight Gillwing in the second issue and defeats him off screen, Jackle later warns Wizeman about the news. Gillwing later makes one last appearance in the fifth issue, where he tries to fight Reala along with Puffy, Jackle and Clawz after Reala proclaiming himself the new ruler of nightmaren, before Gillwing or any of the nightmarens have a chance to fight Reala, the later attacks and makes them fall into an abyss. 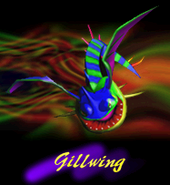 Gillwing in the game's credits.

Gillwing in the NiGHTS into dreams HD remake

Gillwing as he appeared in the Nightmare Zone DLC in Sonic Lost World.

Gillwing featured in a magazine ad for NiGHTS into Dreams.
Add a photo to this gallery

Retrieved from "https://nid.fandom.com/wiki/Gillwing?oldid=10747"
Community content is available under CC-BY-SA unless otherwise noted.