The Dream Gate is NiGHTS: Journey of Dreams' main hub, an idea expanded upon from the original NiGHTS into Dreams there was merely a simple dream select screen, and where all the Nightopias of each child can be accessed in addition to the My Dream A-Life section. Appearing as a large island floating in a night sky over what appear to be storm clouds, the main courtyard contains six gates of which only three are whole and three others are in a state of disrepair dependent on which child you're playing as, an ornate fountain where Dream Drops are stored as you find them, and the tutorial section giving by Owl. This is the only place where Awakers and Nightmarens cannot come after you, so you're free to explore the area at your leisure (necessary to find Dream Drops). 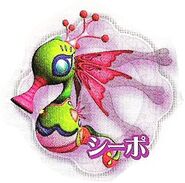 Seapos
Add a photo to this gallery

Dream Gate's concept artwork
Add a photo to this gallery

Retrieved from "https://nid.fandom.com/wiki/Dream_Gate?oldid=10327"
Community content is available under CC-BY-SA unless otherwise noted.