Donbalon has a four-tailed blue jester hat with red bells, with a pink jewel on his forehead, purple glowing eyes, under which is scar-themed makeup. He also has a red nose and purple skin with thick, grinning lips. There are feathers and a Jacobean ruff around his neck, with his ensemble ending in a waistcoat. His arms are very long and thin wires, ending with white gloves and long, thin, spiky fingers. He has a very spherical body almost like a balloon (similar to Puffy) with patchwork.

Donbalon is the boss of William Taylor's Pure Valley dream and where his White Ideya has been spotted there. The strategy is very simple. Donbalon appears from curtains at the bottom of his arena, at this point, NiGHTS will have to launch him through his circus-themed, nightmarish pinball arena (avoiding hitting obstacles for Donbalon to bounce off of) toward the top, where he is destroyed upon impact with the spiked ceiling.

Donbalon's lair is a circus-themed pinball-like tower. It consists of several areas separated by stylish barriers and has a monstrous face with long, spiked teeth at the top. The lair runs vertical, and there are many different obstacles scattered around. A bunch of circus cages appearing and disappearing are found at the very top of the tower.

A close-up look on Donbalon.

Donbalon makes a grand entrance at his evil arena before the second battle. 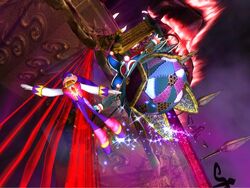 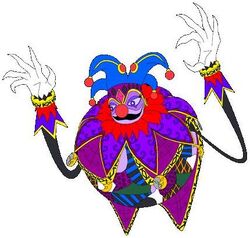 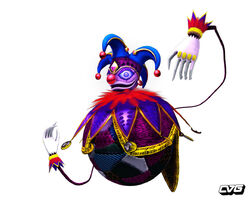 Donablon's artwork
Add a photo to this gallery

Retrieved from "https://nid.fandom.com/wiki/Donbalon?oldid=10408"
Community content is available under CC-BY-SA unless otherwise noted.