Donbalon is Pure Valley's boss and a Will nightmaren, who'll first attack after NiGHTS destroying all of the NiGHTS captures in the level. He later returns to a second and final fight after beating all of the Pure Valley's missions. His boss theme is called "Drifting Donbalon".

Donbalon does not take damage from any of NiGHTS attacks, so to defeat him the player must grab and throw him through a vertical circus-themed pinball arena until they reach the top of it, where there will be a spiked ceilling which will pop Donbalon up.

Upon flying up to him, NiGHTS will automatically grab and start spinning him. The player shall aim and shoot him onward, sometimes it'll be necessary to break obstacles to proceed. Donbalon may try to protect himself by spinning and flying down.

Donbalon has ball physics, so everytime the player throws him, he will bounce around, when he is doing that, he may hit and damage NiGHTS.

The only difference between the first and the second battle, is that in the second one, the pinball arena is much bigger and has many more obstacles.

After the second fight, Donbalon is last seen in a cutscene after the fight, where Wizeman crushes him with his methalic hand as a punishment for failing at stopping NiGHTS.

Donbalon's lair is a circus-themed pinball-like tower. It consists of several areas separated by stylish barriers and has a monstrous face with long, spiked teeth at the top. The lair runs vertical, and there are many different obstacles scattered around.

A close-up look on Donbalon. 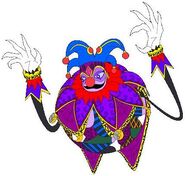 Donbalon Battle Arena.
Add a photo to this gallery

Retrieved from "https://nid.fandom.com/wiki/Donbalon?oldid=12378"
Community content is available under CC-BY-SA unless otherwise noted.