Dash Ball is a recurring item from the NiGHTS' series, when NiGHTS pass through them, he will get blown away into the direction the ball is pointing, in Christmas NiGHTS into dreams, they are replaced by Party Poppers. 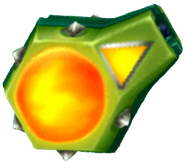 NiGHTS Journey of dreams.
Add a photo to this gallery

Retrieved from "https://nid.fandom.com/wiki/Dash_Ball?oldid=10239"
Community content is available under CC-BY-SA unless otherwise noted.