"A Second-Level black cat with sharp claws, he's spiteful by nature and would rather torment you from the shadows than attack you fair and square. So, just how far will NiGHTS have to chase those quick feet…?"

- Clawz, according to a translated japanese bio.

In NiGHTS into Dreams, Clawz is Frozen Bell's boss and an Elliot nightmaren, who'll attack after all ideyas are collected in the level. His boss battle theme is called "E-Le-Ki Sparkle".

Clawz will always stand above one of his mice fireworks and everytime NiGHTS tries to come close to him, he will jump to a firework far away from NiGHTS.

Clawz lights up his fireworks and it's impossible to avoid them once they get launched, to defeat him, the player must destroy his fireworks, giving preference for lit ones to avoid taking damage, the litten fireworks can be destroyed by either paralooping or drill dashing into it, the ones that aren't can only be destroyed by the paraloop.

Once most of his fireworks are destroyed, Clawz won't be able to run away from NiGHTS anymore and the player will be able to knock him out with a single hit.

For unknown reasons, a spotlight follows Clawz throughout the battle until the player takes out the last mouse.

Clawz's battle takes place on a weird carousel-like machine full of fireworks with pink mice heads, the machine appears to be surronded by big walls made of colorful bricks, for unknown reasons, the walls have holes with a bright light coming out of them.

Clawz was the only NiGHTS into Dreams boss who didn't have any significant role in the Archie Comics, he simply appears as a background character through the story, Clawz appears to be Reala's pet.

In the first issue, Clawz first appears looking at the portal Wizeman is creating to go to the awaking world, him and the other nightmarens later tries to capture NiGHTS after the later escaping with the red ideyas.

In the second issue, Clawz makes a small appearance after Claris defeating Gulpo, where he eats Gulpo alive.

In the third issue, after NiGHTS, Elliot and Claris defeating Wizeman, Clawz appears being petted by Reala while the later explains his plans as the new ruler of nightmare.

In the fifth issue, Clawz, along with Gillwing, Puffy and Jackle, tries to fight Reala, after the later proclaiming himself the new ruler of nightmare, before Clawz or any of the nightmarens have a chance to fight Reala, the later attacks and makes them fall into an abyss.

Clawz makes one last appearance at the sixth issue, where he tries to attack Roger but is stopped by Reala who attacks and makes Clawz blow up. 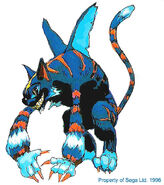 Clawz as he appeared in the Nightmare Zone DLC in Sonic Lost World.
Add a photo to this gallery

Retrieved from "https://nid.fandom.com/wiki/Clawz?oldid=10729"
Community content is available under CC-BY-SA unless otherwise noted.