Chamelan is a humanoid reptilian wizard that resembles a chameleon. He sports the four shapes of the four playing card suites (hearts, clubs, diamonds, and spades) on his colorful tuxedo and hat and uses playing cards in both his first and second battles. In fight one, the players use the cards as a way of finding Chamelan and in fight two, he also uses bombs. In both fights, he uses Kings, Queens and Jacks that attack NiGHTS on his behalf.

Chamelan is thought of as a pushover because he does not actually fight when you face him. Instead, the Jacks, Queens, and Kings will attack the players and must be evaded. Chamelan can be somewhat confusing during the second fight. To find him quickly, wait until the rows of playing cards appear behind the magic cloth. Then, ignore all the solid cards and look for the transparent ones. He is almost always hiding at the transparent Ace card. It's possible to find him though right after he takes off to hide at the start. When you paraloop the curtain and he runs, you'll see a blurred form/shadow moving along the curtain. Follow it, that's him, until he stops and then simply paraloop that spot he has stopped at and you've got him.

Chamelan's arena takes place in a surreal cavern with playing cards and floating spotlights. The arena is shrouded by a void with plant life hidden behind it. Question marks appear on the curtain if the player delays long enough. 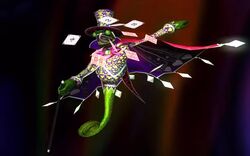 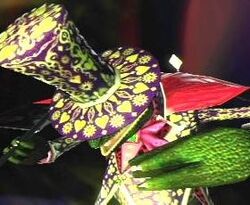 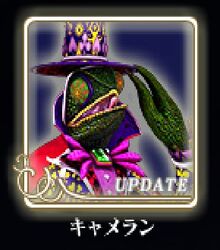 Chamelan's page in the NiGHTS Journey of dreams site.
Add a photo to this gallery

Retrieved from "https://nid.fandom.com/wiki/Chamelan?oldid=10409"
Community content is available under CC-BY-SA unless otherwise noted.