None (uses "they" pronouns)

While only a Second Level Nightmaren, Cerberus is openly feared by allies and enemies alike (including NiGHTS and Reala) seemingly functioning as a weapon of last resort (Wizeman notes that "they have... quite a temper"). Cerberus is also referred to as "they" or "them" because of the same personalities from each head.

Cerberus will relentlessly pursue NiGHTS throughout the fight, charging at her/him for a chance to take a bite

out of the jester. For this situation, the Rocket Persona is the best choice until the Cerberus pauses briefly. NiGHTS must yank on the third orb to knock the heads of Fire and Ice together, stunning them for a bit. The light on the orb in the center changes from blue to yellow to red, indicating how much damage has been done. In the second fight, however, approaching the third orb isn't as easy, for the Thunder head will lash out when NiGHTS gets close enough, dealing five seconds' worth of damage if it bites her/him. Once the Orbs of Ice and Fire have collided three times, the Orb of Thunder detonates, destroying the hellhound.

Cerberus' area appears in Delight City, disguised as a dog's kennel. Once the player enters the area, they find themselves in a null and endless void. The Cerberus lives in a spherical cage with big black crows flying around in it. 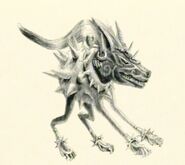 The 'fire' head of Cerberus 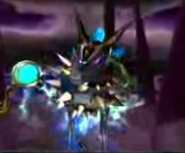 The 'ice' head of Cerberus 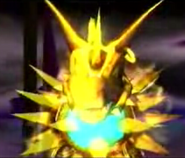 The 'thunder' head that sprouts out of the ball during the rematch.
Add a photo to this gallery

Retrieved from "https://nid.fandom.com/wiki/Cerberus?oldid=10412"
Community content is available under CC-BY-SA unless otherwise noted.