Bonus Ball is a recurring item from the NiGHTS series which appear in nearly every level from all of the NiGHTS games, as the name suggest, it gives the player bonus points.

They appear through the levels with a number over them and when NiGHTS gets one, it will start to follow him and will give bonus points when he passes through rings and collect items, the number over the ball indicates the number of links the player must do, if they do it, the points obtained while the ball was following NiGHTS will get doubled, however, the player will need to do the links fast, because the ball will stop following NiGHTS if he spends a few seconds without making links, consequently, stopping the bonus points.

Bonus Ball after the player succeeds at making the amount of links requested. 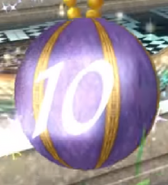 Bonus Ball in NiGHTS: Journey of Dreams.
Add a photo to this gallery

Retrieved from "https://nid.fandom.com/wiki/Bonus_Ball?oldid=9070"
Community content is available under CC-BY-SA unless otherwise noted.