The Alarm Egg is a Night Dimension resident and neutral character in NiGHTS into Dreams and Christmas NiGHTS into Dreams, who goal is to result a game over screen in both games. It's a floating clock inside an eggshell with a light coming from below.

The Alarm Egg can appear in every level from NiGHTS into Dreams but Twin Seeds with the goal to wake up Elliot and Claris. If the visitors don't dualize with NiGHTS, the Alarm Egg will appear and chase the them, if it gets them, the Alarm Egg will make them wake up, resulting in a game over screen.[1] The Alarm Egg will also appear if the play runs out of time when controling NiGHTS, right after Elliot or Claris hit the ground.

The Alarm Egg can't be defeated and once it spaws, it will only disappear if the visitors dualize with NiGHTS again. However, Elliot and Claris can stun the Alarm Egg for a few seconds by jumping over it.

Elliot running away from the Alarm Egg. 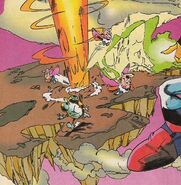 A never seen before Awaker in the NiGHTS Archie Comics.
Add a photo to this gallery

Retrieved from "https://nid.fandom.com/wiki/Alarm_Egg?oldid=11635"
Community content is available under CC-BY-SA unless otherwise noted.